By Dr Wessly Lukose More from this series

God asked the people of Israel, who was locked down in between the Red Sea and the Red Army of Egypt, to ‘Move Forward’ (Exodus 14:15). As long as it was a Lord-led journey they had no option but to follow Him. However, they were stuck with a three-dimensional problem. First, they confronted with the External Problem as they were in between the Red Sea and Pharaoh. Second, they were agonised with the Problem Within, for they were in grave fear and doubt whether they would be drawn in the Red Sea or killed by the Egyptian army. Third, they were disoriented with the Internal Problem of complaints and grumblings. The truth of the matter is that as the Lord Almighty was in charge of their journey, He had successfully handled the external problem, but they had to deal with the other two issues, which they did not, and consequently failed to reach the destiny though momentarily moved forward.

We all are in a journey. The primary question we need to ask is whether the Lord is directing our journey. If He is in control of our journey, no matter how dominant the external problem is, the Lord is powerful to lead us through. Whether it is Red Sea or Red Army, the Lord has a way. However, the crucial reality is that we have to overcome other two issues (the problem within and the internal problem), in order to move forward to reach the goal. Delaying to deal with them or failing to do so will be costly. 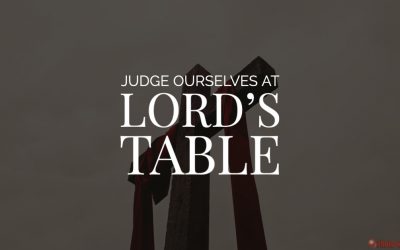 It is a very common behaviour of mankind to burst out in anger when they do not receive the honour and respect, which is due to them. At times, we will be forced to get angry as we confront a situation or at someone’s gross behaviour. Unfortunately it is an undeniable...